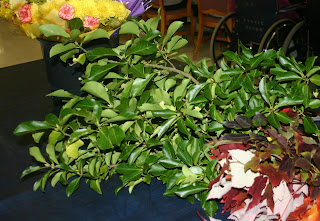 It’s known as “Garden Therapy”. Every month 8 or 10 members of The Mystic Garden Club visit Mystic Manor Nursing Home. Arms full of greens and flowers, we greeted the 20 or so residents that were assembled in the recreation room that morning. When we arrived the residents were enjoying their morning coffee while listening to the newspaper being read aloud. MGC members were filling baskets with florist foam and clipping the greens and flowers into sizes suitable for the containers. 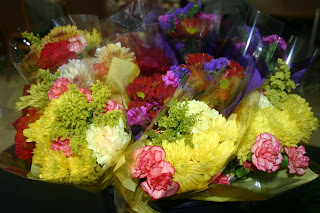 After the morning news was over, the tables were covered with the old newspapers and the work began. Each resident received a basket to work on. Greens were distributed to the table for the basis of the bouquet. 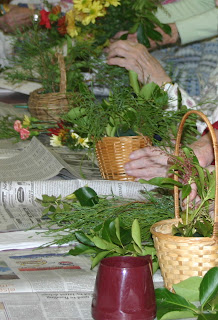 Many of the residents are frail and some have difficulty pushing the stems into the florist foam. But every resident was intent and delighted in the color and shape of the bouquets as they evolved. Garden club members were there to supply helping hands but most residents took charge of their own creation. “I need a pink and a purple flower” I was told. So I hustled over to the table to find the desired colors. When I was admiring one woman’s basket she told me she had gone to school for this. I tried to find out more but she was busy with her flowers. Another resident had both wrists wrapped and placed her stems with difficulty. But I learned that she had been in a Garden Club years ago and she had a definite sense of balance and desire to have her basket just so.

The time just flew by and the baskets took shape. It is amazing how a bunch of assorted greens and mixed flowers turns into 20 or more bouquets.

Clean Up at the Mystic Depot April 2013

Boxwood Preparation for the Greens Sale